Often in life, it’s not the easiest of times, but the hardest that can bring out the best in people. Abigail’s life and Bible story is a powerful reflection of this very truth. Instead of wallowing in self-pity and defeat over her circumstance, she acted courageously and used great wisdom when faced with a threatening scenario. What can we learn from Abigail’s story from the Bible all these years later? More than you might think:

Abagail Was A Wise Woman in a Toxic Relationship

Abigail’s story is told in 1 Samuel 25, at the time when Saul was king. Samuel the prophet had just died, and David and his men had traveled down into the Desert of Maon. It was there the conflict began. The Bible describes Abigail as being “an intelligent and beautiful woman,” but sadly, her marriage was hard (1 Samuel 25:3).

To say she married into a toxic situation would likely be an understatement. Nabal was a very wealthy man but is also described as “surly and mean in his dealings” (1 Samuel 25:3). Despite his lack of judgement, Nabal’s household seemed to do all they could to keep him, and themselves, out of the trouble he initiated.

God’s word tells us in chapter 25 that David and his 600 men had shown great kindness to Nabal and his workers. They had protected them when the servants had cared for their sheep out in the desert, and they were faithful to never take anything from them. At a time when dangers in the desert lurked all around, this was a huge blessing from David to Nabal and his family.

Their protection gave them the ability to finish their work and to prosper from their business dealings. So when David sent a word of kindness to Nabal, asking him for a simple act of hospitality for his men (which was common in this culture and time), imagine his anger when this hard-hearted man responded with such rudeness and contempt.

Abigail Was Caught in the Rising Tension

Nabal answered David’s servants, “Who is this David? Who is this son of Jesse? Many servants are breaking away from their masters these days. Why should I take my bread and water, and the meat I have slaughtered for my shearers, and give it to men coming from who knows where?" (1 Samuel 25:10-11)

David said to his men, “Put on your swords!” So they put on their swords, and David put on his. About four hundred men went up with David, while two hundred stayed with the supplies.” (1 Samuel 25:13)

Nabal’s servants must have immediately feared for their lives, and one of those servants knew exactly where to run for help: to Nabal’s wife, Abigail.

Of Abigail’s history, we only know that she came from Carmel. But we see quick reasoning and sound judgment in her character, for she knew just what to do. She was not afraid to act quickly:

One of the servants told Nabal’s wife Abigail: “David sent messengers from the desert to give our master his greetings, but he hurled insults at them. Yet these men were very good to us. They did not mistreat us, and the whole times we were out in the fields near them nothing was missing. Night and day they were a wall around us all the times we were herding our sheep near them. Now think it over and see what you can do, because disaster is hanging over our master and his whole household. He is such a wicked man that no one can talk to him.” (1 Samuel 25:14-17) 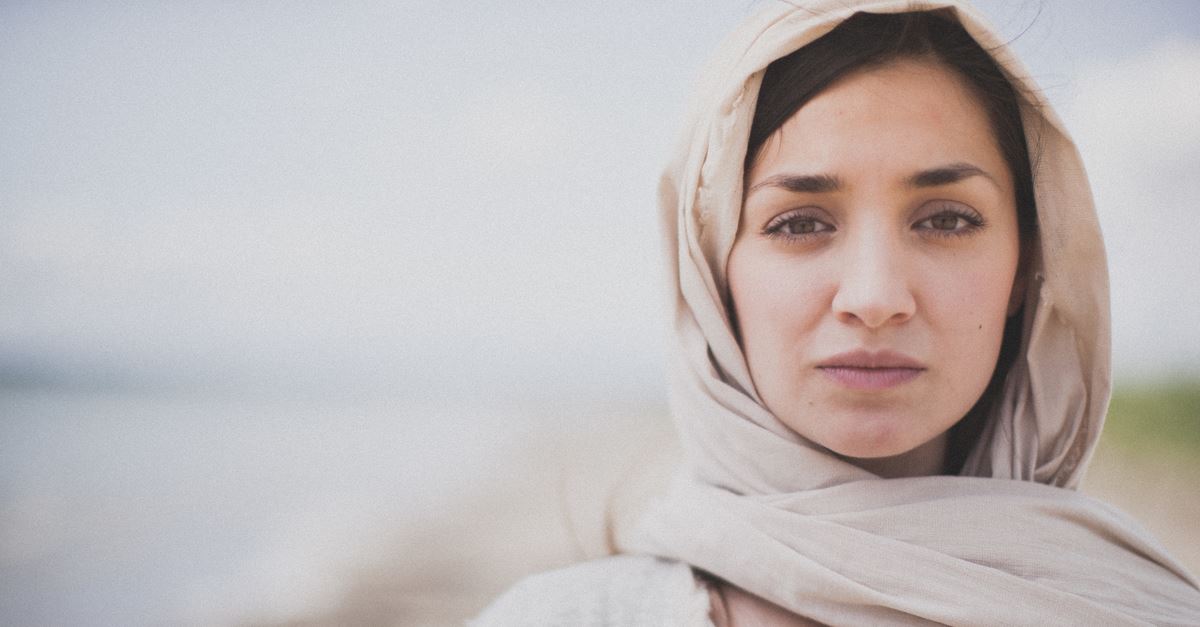 1. Don’t let fear hold you back – move forward in God’s courage and wisdom.

No matter how difficult or threatening the situation, God’s power within us is greater than we can ever fully see or comprehend. He is able to use any of us, even those who feel insignificant or powerless, for His greater good.

Abigail showed great wisdom in acting quickly, swiftly, and speaking honorably to David. She took control of the situation that was potentially dangerous for them all. She didn’t just sit around and blame her husband or remain stuck in fear.

She sent food and her servants up ahead. She chose wisely to act alone, without Nabal knowing. And as she came riding her donkey towards David and his men, she met him with honor and respect for how he had cared for her people.

Instead of hiding or cowering, Abigail moved forward, towards the danger, knowing that God was surely with her. And doing so saved her household.

2. Be humble and kind, seek peace with those around you.

“When Abigail saw David, she quickly got off her donkey and bowed down before David with her face to the ground. She fell at his feet and said: “My lord, let the blame be on me alone. Please let your servant speak to you, hear what your servant his to say…” (1 Samuel 25:23-24)

Abigail had the courage and strength to shoulder the blame for something she didn’t do. She begged forgiveness on behalf of her entire household, and God used that moment to show David how wrong it would be to take revenge in his own way and kill these innocent servants.

This was a pivotal moment for Abigail because she had no idea how David would respond. But still, she chose to do the right thing. She looked beyond herself. She acted with humility and compassion. She sought to make peace with the very one her own husband had angered. She asked for a chance to speak and right the wrong.

3. Our words and actions are powerful. Look to the bigger picture.

“Please forgive your servant’s offense, for the Lord will certainly make a lasting dynasty for my master, because he fights the Lord’s battles. Let no wrongdoing be found in you as long as you live. Even though someone is pursuing you to take your life, the life of my master will be bound securely in the bundle of the living by the Lord your God. But the lives of your enemies he will hurl away as from the pocket of a sling.” (1 Samuel 25:28-29)

Abigail knew her words and actions were powerful and carefully thought through each and every one. She understood that the bigger picture of this story was much more significant than that one moment, so she reminded David of how important it was that God was building greatness in his life, that the Lord Himself was fighting for David.

She had obviously heard of David’s stories—that Saul had pursued his life, that David had used a sling to kill a giant—and spoke in such a way to bring him back to God’s bigger picture. All through David’s life, God fought for him, His beloved, and that very God was fighting for Abigail too.

4. A true warrior is loyal and faithful, thinking of others before themselves.

“When the Lord has done for my master every good thing he promised concerning him and has appointed him leader over Israel, my master will not have on his conscience the staggering burden of needless bloodshed or of having avenged himself. And when the Lord has brought my master success, remember your servant.” (1 Samuel 25:30-31)

Abigail fought to protect her husband and her house. She was not thinking only of herself, but of all those she loved. She was loyal and honored God and her family in all she did. She chose to show great respect towards David, reminding him that God would bring to his life blessing and every good thing He had already promised.

And with wisdom and discernment, she asked David for only one thing at the end of her plea, that when God brought him success, he would remember her. Abigail was incredibly faithful in her words, her actions, and in her demonstration of love for the servants. She knew that if she could win David’s favor in this situation, her workers and family would be spared.

5. Remember, God will fight for you. You are never alone.

“David said to Abigail, “Praise be to the Lord, the God of Israel, who has sent you today to meet me. May you be blessed for your good judgment and for keeping me from bloodshed this day and from avenging myself with my own hands.” (1 Samuel 25:32-33)

God fought for Abigail, just as He so faithfully fights for us still today. He did not leave her on her own but gave her great favor in the sight of David.

As God worked through Abigail and spared the lives of her entire household, she used timely wisdom in telling Nabal what had happened. Because of his drunkenness that evening, she waited till daybreak to share the whole story. And the Bible says, “his wife told him all these things, and his heart failed him and he became like a stone. About ten days later, the Lord struck Nabal and he died” (1 Samuel 25:37-38).

God took care of Abigail and the story goes on to say that when David learned that Nabal had died, he sent word to her, asking her to be his wife. David showed honor to Abigail by taking care of her, and the Lord faithfully provided for her and all her household, because of the courage and wisdom she portrayed. Through her good judgment, and choosing to act humbly and bravely, God showed Himself strong on her behalf, saving David from going to battle, and rescuing Abigail and her servants from the evil of Nabal.

Ready to experience the life-changing power of God's love in your life?  Get our free devotional - You Are God's Beloved Daughter: 31 Days of Love Letters from God

Living the Big Picture: Fearless in Faith and Grace

Often when we are faced with difficult battles or hard struggles, we may feel like we’ve been left on our own. But God is always with us, leading us with His Spirit of wisdom and discernment, pouring out His strength and grace, reminding us that He is the greatest power propelling us onward.

We never have to stay stuck in fear or defeat, thinking that our situation will never change. As we are faithful to His word and His leadership, God can do in just a moment what may take years to work through by ourselves. Abigail’s story reminds us again that God sees the heart, and He works powerfully on behalf of those who choose to follow Him.

Maybe your story is very different from Abigail’s, yet you’re still feeling like your future is troubled or threatened; possibly by illness, loss, uncertainty, or difficult relationships, or a toxic environment. Be assured my friend, God knows your way, and He understands the burdens you carry. He is fighting for you right now, even when it’s hard to see the full, big picture.

Keep following His lead, press in close to His presence. He is faithful to give you grace for each day, and the power to walk through the most difficult of times. Your story is not over yet, He is bringing greater beauty and strength through every hard moment. God is able to carry you straight through. Keep pressing forward, there is good and blessing still in store.

Debbie McDaniel is a writer, pastor's wife, mom to three amazing kids (and a lot of pets). Join her each morning on Fresh Day Ahead's Facebook page, for daily encouragement in living strong, free, hope-filled lives. Find her also on Twitter and at her blog www.debbiemcdaniel.com.

This content first appeared on iBelieve.com and is used here with permission. To view the original visit: https://www.ibelieve.com/faith/things-women-learn-from-abigail-bible.html