BIBLE VERSE OF THE DAY: By faith the harlot Rahab did not perish with those who did not believe, when she had received the spies with peace. Hebrews 11:31

The Faith of Ordinary People
by Jennifer Waddle

I love how the Lord employed unlikely people to do extraordinary things. Often, the outcast was embraced, the sinner was chosen, and the “labeled” was marked by God for a divine purpose. 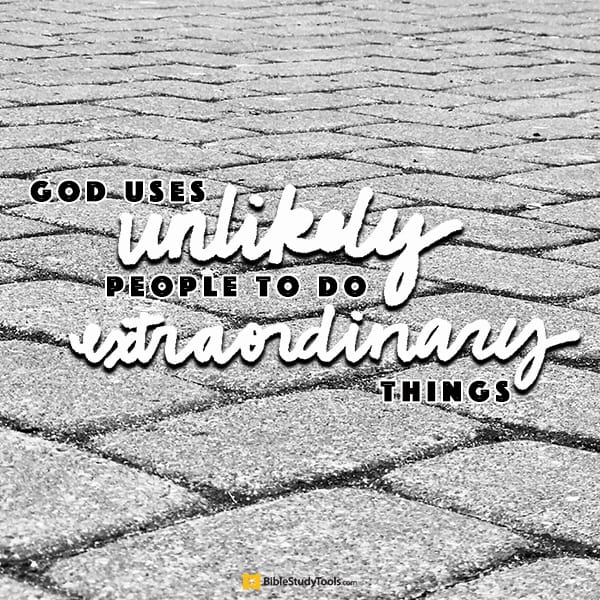 I find it interesting that the two Israelite spies, sent by Joshua to search out the land of Jericho, went specifically to the house of Rahab the harlot. While it made sense that they would lodge at a house located on the wall of Jericho—for strategic purposes, it doesn’t make sense that they chose to lodge with a harlot.

Against the commandments of God, a harlot would normally have been avoided at all cost.Yet, against all of our rationale, God chose Rahab to help His people, and eventually become part of the lineage of Jesus. (see Matthew 1:5)

What a beautiful testimony of God’s character! He truly sees past the physical and straight to the heart. God looks for those who will be faithful to Him, and often finds them in the most unlikely places.

For the eyes of the Lord run to and fro throughout the whole earth, to show Himself strong on behalf of those whose heart is loyal to Him…2 Chronicles 16:9

By faith, Rahab risked her own life to help the spies escape. It was her belief in the Lord that saved her and her whole family. Unlike the other inhabitants of Jericho, the miraculous things she had heard about God spurred her to action.

Now before they lay down, she came up to them on the roof, and said to the men: “I know that the Lord has given you the land, that the terror of you has fallen on us, and that all the inhabitants of the land are fainthearted because of you. For we have heard how the Lord dried up the water of the Red Sea for you when you came out of Egypt, and what you did to the two kings of the Amorites who were on the other side of the Jordan, Sihon and Og, whom you utterly destroyed. And as soon as we heard these things, our hearts melted; neither did there remain any more courage in anyone because of you, for the Lord your God, He is God in heaven above and on earth beneath. Joshua 2:8-11

In holy fear of the Lord, Rahab acted in faith. Instead of closing the door on the spies, she allowed her reverent fear of “God in heaven above and on earth beneath” to motivate her.

The lesson for us is to let a holy and reverent fear of the Lord motivate our service to Him; to remember what He has done, what He is doing, and what He will do. God does amazing things in the lives of ordinary people. All He looks for is faith in His Son Jesus—a faith that leads us to do great things for His glory. I don’t know about you, but I want that more than anything.

Want to go beyond a minute in the Word today? Continue over to BibleStudyTools.com!