Give What You've Received
By Brent Rinehart

“Let all bitterness and wrath and anger and clamor and slander be put away from you, along with all malice. Be kind to one another, tenderhearted, forgiving one another, as God in Christ forgave you” - Ephesians 4:31-32

Ruth Bell Graham, wife of legendary evangelist Billy Graham, once said that “a happy marriage is a union of two good forgivers.” Those are some of the wisest words ever spoken.

In a marriage, there are some things you are better at than your spouse. And, other things your spouse is better at than you. For instance, in our home, my wife and I are both on the same page with the budget and the priorities, but I handle a majority of the finances and bill-paying. While we split many household chores, my wife is better at laundry than me, and I wash a lot of the dishes. Most healthy marriages are a partnership this way. But, there's one thing that a marriage cannot afford to have one-half excel at over the other: forgiveness. Both partners need to be equally adept at it.

This verse in Ephesians is so challenging, especially if you are prone to hanging onto something far too long. I became a Christian when I was young, but didn't always follow Christ. I went through periods in my life where I was far from who God created me to be. However, just like the father in the parable of the Prodigal Son, God accepted me back with open arms. I was never beyond His love and forgiveness. Knowing the things I've done, and the things for which God has forgiven me, how could I not extend forgiveness to others?

My wife and I have had arguments in our time together. What couple hasn't? But, there's nothing she can do that would rise to the level of the sins I've committed against God. And, yet, each and every time, He forgives. Who am I to think that my wife is ever outside of being forgiven? 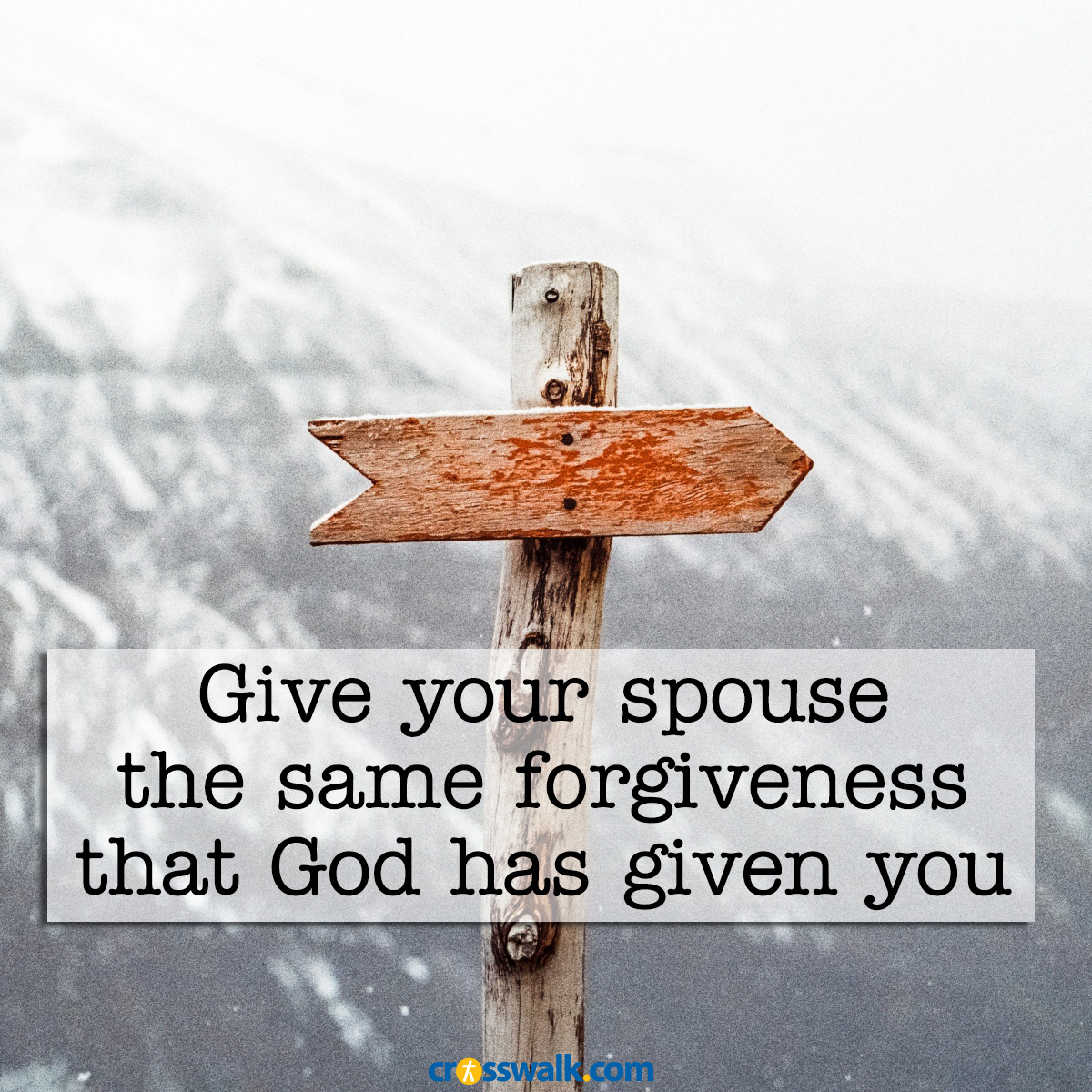 In Matthew 18, Jesus illustrates the point with a parable, as He so often did. A servant owed his master 10,000 talents, but the master “took pity on him, canceled the debt and let him go” (Matthew 18:27). As the servant went out, he encountered a fellow servant who owed him only 100 denarii who could pay his debt. The servant refused to show mercy and had him thrown into prison.

Pastor and author Tony Evans ties biblical love and forgiveness together, describing it this way: “Biblical forgiveness means you release your spouse from a debt owed to you. Forgiveness is not contingent on how you feel about your spouse. It is a choice to no longer blame your spouse for an offense. First Corinthians 13:5 details this in a most straightforward way: Biblical love “keeps no record of wrongs.” Biblical love doesn’t justify wrong, nor does it ignore wrong, excuse it or pretend it doesn’t exist. All of those types of responses to wrongdoing would lead to enablement. Rather, biblical love acknowledges and addresses the wrong and then forgives and releases it.”

The best thing we can do for ourselves, our spouses and our marriages when we encounter conflict is to meet it head-on. We need to communicate with each other, then love and forgive each other just as Christ loves and forgives us.

I mess up a lot. I say things I shouldn’t and make the wrong choices from time to time. I’m so thankful for grace and mercy that God extends to me daily. The least I can do is offer the same grace and mercy to others, starting with those inside my own home. Holding on to bitterness and withholding forgiveness is sinful and unhealthy. As the famous quotes says, “Not forgiving someone is like drinking poison and expecting the other person to die.”

Brent Rinehart is a public relations practitioner and freelance writer. He writes about parenting, marriage and faith at www.apparentstuff.com. You can also follow him on Twitter.